Congratulations to Abed and Lisa Medawar on their 22nd marriage anniversary! 22 years of marriage and 2 kids to be proud of, Alexandria and Trevor James.

Here’s to the Happy Couple: 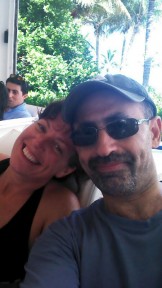 With the kind hospitality of Habib Nicolas Medawar,  the Medawar family and the Medawar and relatives family associations held the first combined iftar.

Congratulations to Imad and Suha Medawar – 20 years of marriage and 2 boys to be proud of, Bilal and Tarik.

Some Pictures from the Wedding, 20 years ago: 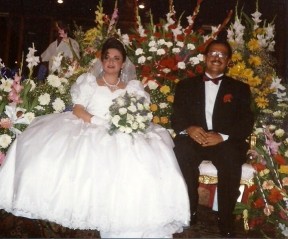 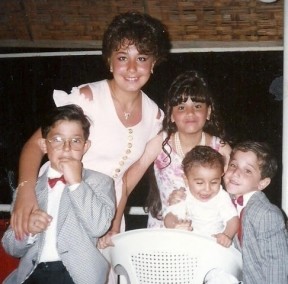 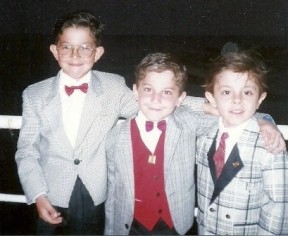 Mohamad Kamal Medawar, Born in 1928, has led a full life and is a great grandfather. The true legacy of Mohamad is his story. His wife Margret Medawar, and son, Bassem Medawar, took it upon themselves to help him put together his most interesting and inspiring life stories into one book in the form of an autobiography. 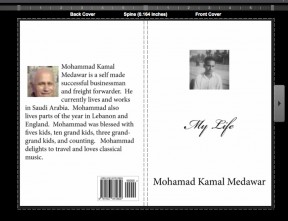 Here’s a synopsis of the book published on Amazon:

This book is the life story of a self made successful businessman and freight forwarder, Mohammad Kamal Medawar. The narrative starts in early childhood, at a time when the author’s country of birth, Lebanon, was going through its formation as a modern nation. Each episode of the Mohammad’s life is covered by a chapter: early childhood, going to work, the turning point that changed Mohammad’s professional life from a barber to a successful and trusted businessman, early days as a freight forwarder and first travels. The narrative then takes the reader through the ups and downs of the 1973 wars, oil boom period, then Lebanese civil war, reestablishing business in Saudi Arabia, and the experience of establish business in the United States. The story ends with the newest generation of great grand kids.

The book is available on create space: https://www.createspace.com/5283563

Mohamad Musbah R. Almedawar, current PhD student in Dresden Germany, and former research fellow at the American University of Beirut Medical Center has published 2 papers on the use of Artificial neural network modeling in prediction of nutritional behavior of high cardiovascular risk patients  on July 2015 and in prediction of accurate dosage for anticoagulation medication on March 2014

Background: High dietary salt intake is directly linked to hypertension and cardiovascular diseases (CVDs). Predicting behaviors regarding salt intake habits is vital to guide interventions and increase their effectiveness. We aim to compare the accuracy of an artificial neural network (ANN) based tool that predicts behavior from key knowledge questions along with clinical data in a high cardiovascular risk cohort relative to the least square models (LSM) method. Methods: We collected knowledge, attitude and behavior data on 115 patients. A behavior score was calculated to classify patients’ behavior towards reducing salt intake. Accuracy comparison between ANN and regression analysis was calculated using the bootstrap technique with 200 iterations. Results: Starting from a 69-item questionnaire, a reduced model was developed and included eight knowledge items found to result in the highest accuracy of 62% CI (58-67%). The best prediction accuracy in the full and reduced models was attained by ANN at 66% and 62%, respectively, compared to full and reduced LSM at 40% and 34%, respectively. The average relative increase in accuracy over all in the full and reduced models is 82% and 102%, respectively. Conclusions: Using ANN modeling, we can predict salt reduction behaviors with 66% accuracy. The statistical model has been implemented in an online calculator and can be used in clinics to estimate the patient’s behavior. This will help implementation in future research to further prove clinical utility of this tool to guide therapeutic salt reduction interventions in high cardiovascular risk individuals.

The full text can be read here.

Mohamad Musbah R. Almedawar, current PhD student in Dresden Germany, and former research fellow at the American University of Beirut Medical Center has published a paper as a first author on consumption of salt in Lebanon, it’s sources and adverse health effects, and a narrative of the Lebanese Action on Sodium and Health campaign. A few months earlier, a report of all the research that has been done on the Lebanese society by the campaign leaderes, including Mohamad, in the Nutrients Journal.

Here’s an abstract of the paper:

Sodium intake reduction efforts in Lebanon are quite recent and have just started to take effect on the national level. Starting out from an academic institution, the Lebanese Action on Sodium and Health (LASH) campaign was established to counter the increasing prevalence of hypertension and associated adverse health effects. The campaign’s strategy was based on four pillars: research, health communication, advocacy, and monitoring. The LASH group set out with determining: baseline sodium intake of the population, main sources of sodium intake, and the knowledge, attitudes, and behaviors (KAB) of the population as a situation analysis that prompts for action. This gave LASH tangible evidence of the magnitude of the problem and the need for the government, the food industry, and the consumers, to be mobilized to take part in devising a solution. Currently, Lebanon is at a stage of technically working to reduce the sodium content in the major sources of sodium, namely local bread and bread-like products. The next steps will include implementation of a plan for monitoring industry compliance, while studying other food targets, including dairy products and processed meat. Meanwhile, the health communication plan is ongoing and the Salt Awareness Week is celebrated every year with media appearances of LASH researchers to raise the issue to the public eye.

Here’s an abstract of the report:

Sodium intake is high in Lebanon, a country of the Middle East region where rates of cardiovascular diseases are amongst the highest in the world. This study examines salt-related knowledge, attitude and self-reported behaviors amongst adult Lebanese consumers and investigates the association of socio-demographic factors, knowledge and attitudes with salt-related behaviors. Using a multicomponent questionnaire, a cross-sectional study was conducted in nine supermarkets in Beirut, based on systematic random sampling (n = 442). Factors associated with salt-related behaviors were examined by multivariate regression analysis. Specific knowledge and attitude gaps were documented with only 22.6% of participants identifying processed foods as the main source of salt, 55.6% discerning the relationship between salt and sodium, 32.4% recognizing the daily limit of salt intake and 44.7% reporting being concerned about the amount of salt in their diet. The majority of participants reported behavioral practices that increase salt intake with only 38.3% checking for salt label content, 43.7% reporting that their food purchases are influenced by salt content and 38.6% trying to buy low-salt foods. Knowledge, attitudes and older age were found to significantly predict salt-related behaviors. Findings offer valuable insight on salt-related knowledge, attitude and behaviors in a sample of Lebanese consumers and provide key information that could spur the development of evidence-based salt-reduction interventions specific to the Middle East.

Today, May 11, 2015, marks the 35th marriage anniversary of Riyad and Bassima Medawar! Riad and Bassima have 4 children, Rima, Siba, Mohamad, and Majed, and 1 grandchild,  Ramez, son of Rima and Tarek Mansour. 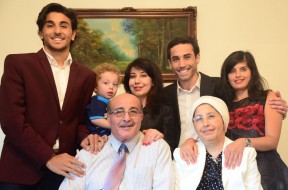 Family of Riyad and Bassima Medawar

Hiba Medawar, daughter of Ibrahim Medawar and Wissam (Hounainy) Medawar, has tied the knot with Ahmad Houssamy on March 20, 2015.

Hiba is a Haigazian University graduate and currently works as a mobile App developer at Born Interactive , while Ahmad is bank employee in Bank Med.

Here are some pictures from the wedding took place in Ramada Hotel, Beirut.

Mohamad Musbah R. Almedawar, current PhD student in Dresden Germany, and former research fellow at the American University of Beirut Medical Center has published a paper on the effect of Waterpipe (arguile) smoking on heart disease. Here’s an abstract of the paper:

Globally, waterpipe (WP) smoking is becoming a more prevalent form of tobacco consumption. Whilst research so far has demonstrated a significant link between WP use and a number of health outcomes, little is known of its association with heart disease. We examine in this study the association of WP smoking with angiographically confirmed coronary artery disease (CAD).
MethodsA total of 1210 patients, aged 40 years and over and free from smoking-associated illnesses or history of cardiovascular procedures, admitted for coronary angiography at four major hospitals in Lebanon, were included. The extent of CAD was summarized in two ways, firstly as diseased (≥50% and ≥70% occlusion in at least one main coronary artery) versus non-diseased (entirely normal coronaries), and secondly, as CAD cumulative score based on Duke CAD Prognostic Index. A score of WP-years, capturing intensity and lifetime duration of exposure, was estimated for each individual.
ResultsLifetime exposure exceeding 40 WP-years was associated with a threefold significant increase in the odds of having severe stenosis (≥70%) compared to non-smokers (OR = 2.94, 95% CI 1.04 to 8.33) as well as with the CAD Index (β =7.835, p-value = 0.027), net of the effect of socio-demographic characteristics, health behaviors and co-morbidity. A dose-response relationship between WP-years and percent stenosis was also established. WP smoking status (never, past and current) did not associate with CAD.

ConclusionsCumulative exposure to WP smoking is significantly associated with severe CAD. There is a need to monitor WP use among cardiac patients and include this information in their medical charts in the same manner cigarettes smoking is documented. This is likely to increase awareness of the hazards of WP smoking and prompt physicians to target WP tobacco control by providing advice to their patients on WP smoking cessation

On 25 May, David Medawar, Senior Programme Manager, Dubai Centre, will begin a World Record attempt to become the fastest person to travel to all 195 countries in the world.

This global challenge will involve the delivery of a One World flag to each nation David visits in exchange for a rock from within its borders.  An ambassador will accept the flag on behalf of the nation and offer the rock as a symbol of commitment to the One World Vision.  Once the expedition is complete, the rocks will form part of display, upon which a One World tree will be planted.

David will commence his Expedition on 25 May by presenting Sir Andrew Likierman with the first of many One World flags. 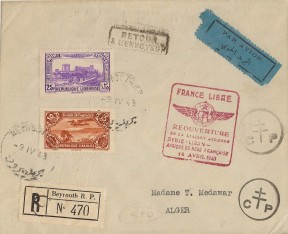